About the Department of Mathematics

The Mathematics Department at the University of Iowa is dedicated to a mission of research, graduate, and undergraduate education in pure and applied mathematics, and support of the education of students in engineering, science, and the liberal arts.

Prospective students, family members, and visitors will find useful information in our webpages when visiting our campus.

The Department of Mathematics main office in Room 14, MacLean Hall, is open Monday through Friday from 8:30 a.m. to 12:00 (noon) p.m. and 1:00 p.m. to 4:30 p.m. We are located on the historic Pentacrest in Iowa City, Iowa.  Our department phone number is 319-335-0714. You may also contact us by e-mail at mathematics-department@uiowa.edu. Our mailing address and fax number are shown at the bottom of this page.

Location
MacLean Hall is located in downtown Iowa City, east of the Iowa River, at the southwest corner of the Pentacrest and next to the Old Capitol Building (pictured here).  Click here for a map showing the location of MacLean Hall.  The Old Capitol Museum, U of I Natural History Museum, downtown shopping, dining, and entertainment is nearby.

Accessibility Summary
MacLean Hall and all other buildings on the Pentacrest are accessible to persons with disabilities.  All hallways, offices, classrooms, restrooms, and the labs in MacLean Hall are accessible, including our newly-renovated Math Tutorial Lab.

Accessible campus and city buses serve the Pentacrest, including frequent stops outside of MacLean Hall 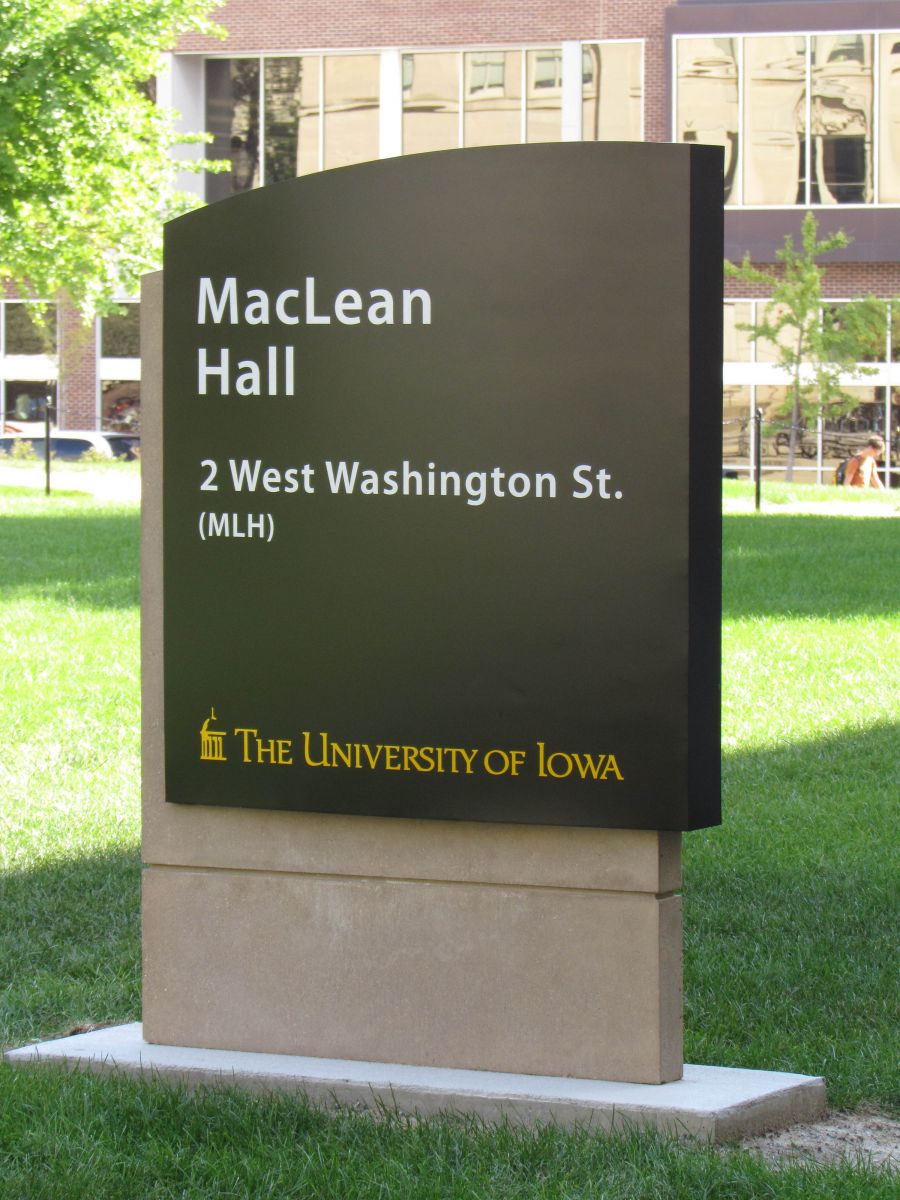 along Washington Avenue. There are three other bus stops that also serve the Pentacrest on Clinton Street, Madison Street, and Jefferson Avenue.

Accessibility Path
The accessible entrance for MacLean Hall is located at sidewalk level on the northeast corner of the building. This is the corner of MacLean Hall that is nearest to the Old Capitol.  This entryway leads directly to the building elevator, just inside the entrance.

Accessibility Parking
The nearest identified accessible parking is the parking ramp located on Capitol Street, approximately 1½ blocks south of MacLean Hall. Pedestrian entries to the parking ramp are accessible from indoors in the University Capitol Center, south of the Pentacrest, across Washington Avenue.  There are also plenty of public seating areas, restaurants, and accessible public restrooms in the University Capitol Center.

Elevator
The building elevator in MacLean Hall is located in the northeast portion of the building, just inside the accessible entrance.  All floors are served by the elevator.

Accessibility Restrooms
Newly-remodeled accessible restrooms are located on each floor of MacLean Hall, except for the basement. The restroom locations are: 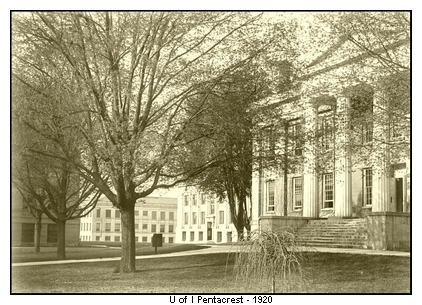 The University of Iowa was founded on February 25, 1847, and was created by an act of the First General Assembly of the State of Iowa convening in Iowa City less than two months after Iowa was admitted to the Union as the 29th state. The bill was signed by Iowa's first governor, Ansel Briggs.  With the seat of the state government relocating to Des Moines in 1857, the Old Capitol became part of the University of Iowa.  Classes were first held in it's chambers and the first University of Iowa graduates received their diplomas shortly before the outbreak of the American Civil War.

MacLean Hall was constructed over a two-year period following devastating turn-of-the-century fires that destroyed the former North Hall ("Old Physics"), South Hall, and the Medical Building.  These three buildings, along with the Old Capitol and the old Dental Building (torn down in 1970), once stood centered on a north-to-south axis line on the grassy mall later named "The Pentacrest".  The cornerstone was laid in 1910 and MacLean Hall opened for classes in 1912.  Interestingly, North Hall - although gutted by fire - was restored and reopened.  It was finally razed in 1949.  Old Capitol, standing since 1840, escaped a similar fiery disaster when the cupola and dome caught fire from a workman's torch in 2001.  A concrete barrier under the cupola saved the rest of the historic building from the flames.  Donations from near and far helped rebuild the cupola and dome. With a replacement 19th-century bell that closely matched the ruined bell in the cupola, and a new layer of gold leaf on the rebuilt dome, the Old Capitol reopened in 2006.

Modern space physics started in MacLean Hall in the mid-1950s where Dr. James Van Allen (Department of Physics & Astronomy) and his colleagues developed and built the payload for Explorer I,  America's first earth-orbiting science instrument.  The instrument package detected the radiation belts that surround the Earth. The radiation belts now carry Dr. Van Allen's name. The discovery data poured in from recording stations from around the world.  The data was stored on reels of magnetic tape in the basement of MacLean Hall for over 50 years and have only been recently digitized.  You may read the stories of Explorer I and Dr. Van Allen and his team (and listen to the radiation belt discovery data yourself) here.

Did you know long-distance wireless communication first arrived in Iowa here in MacLean Hall more than 100 years ago? Check out these news articles in the Daily Iowan (1913) and the Transit (1916).

Tell me about all of the names around the top of MacLean Hall?

When you first visit MacLean Hall, you may notice the frieze of the building is engraved with the names of scientists and mathematicians of past centuries. The frieze is part of the larger entabulature that sits atop the stone pilasters  topped with scrolls or volutes on the outside of MacLean Hall. The names mark milestones of scientific, mathematical, and technical achievement thoughout history. When you consider when MacLean Hall was built, starting in 1910, one scientific genius's name appears to be missing.  In his 1905 Special Theory of Relativity, Albert Einstein determined that the laws of physics are the same for all non-accelerating observers, and that the speed of light in a vacuum was independent of the motion of all observers.  Hence, Albert Einstein was already known in scientific circles by the time MacLean Hall was finished in 1912,  So, why wasn't Einstein's name included on the top of MacLean Hall?  Einstein's legacy wasn't sealed until observations were made of an eclipse of the sun and the slight apparent displacement of the surrounding background stars bacame visible during that total solar eclipse in 1919. The observations of the shift of the star positions provided proof of his 1915 General Theory of Relativity where accelerating bodies and observers were accounted for in this new theory. Only then the full impact of Einstein's work was felt and Einstein then acheived celebrity status.  Consequently, Einstein's name was not part of the list of scientific luminaries chisled into the frieze several years earlier. Still, it is interesting to read the roster of famous scientists and mathematicians from antiquity through the 19th Century by taking a stroll around MacLean Hall. Perhaps the builders could have added Hypatia of Alexandria, Ada Lovelace, Madame Curie, and Sonia Kovalevsky.

Visit our photographic history of MacLean Hall. The photo gallery was created on the occasion of the building's centennial, 1910-2010.

The University of Iowa was founded on February 25th, 1847 during the 1st Iowa General Assembly in Iowa City